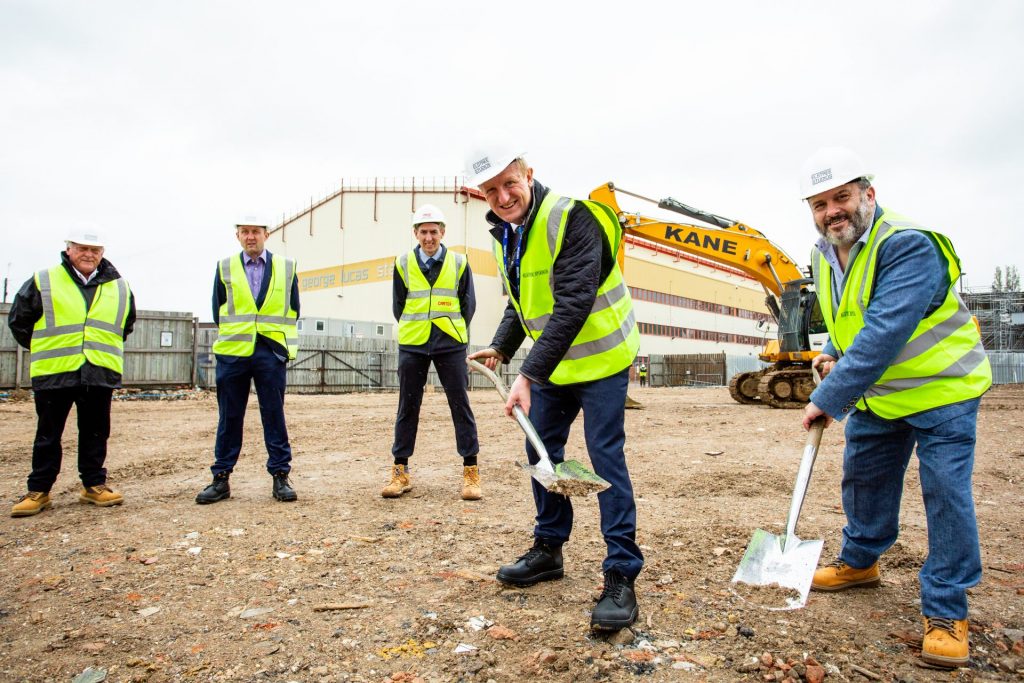 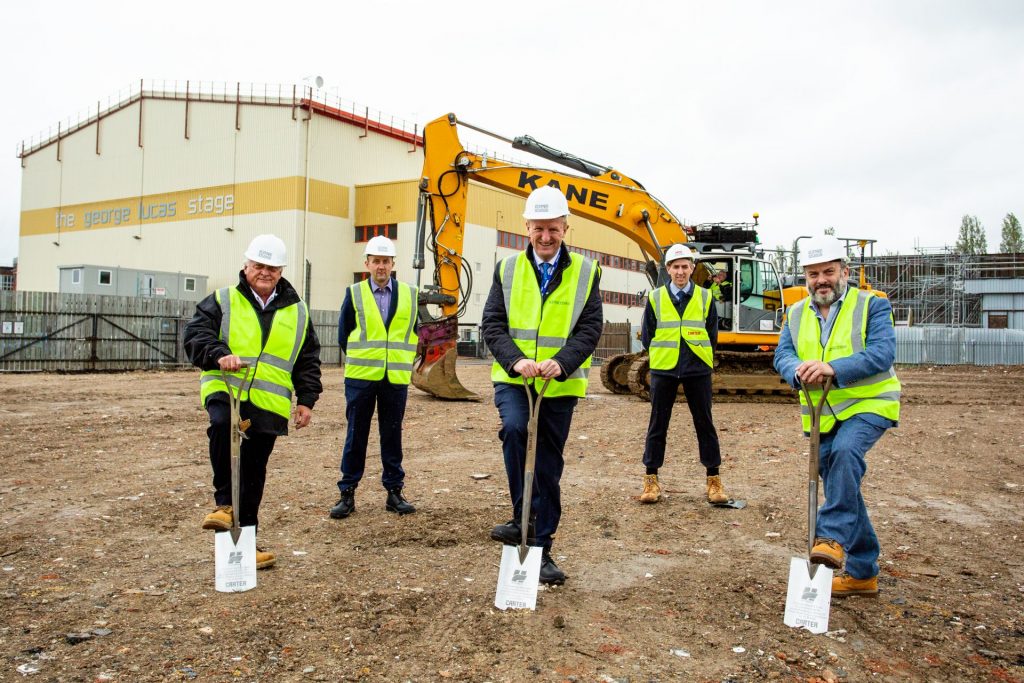 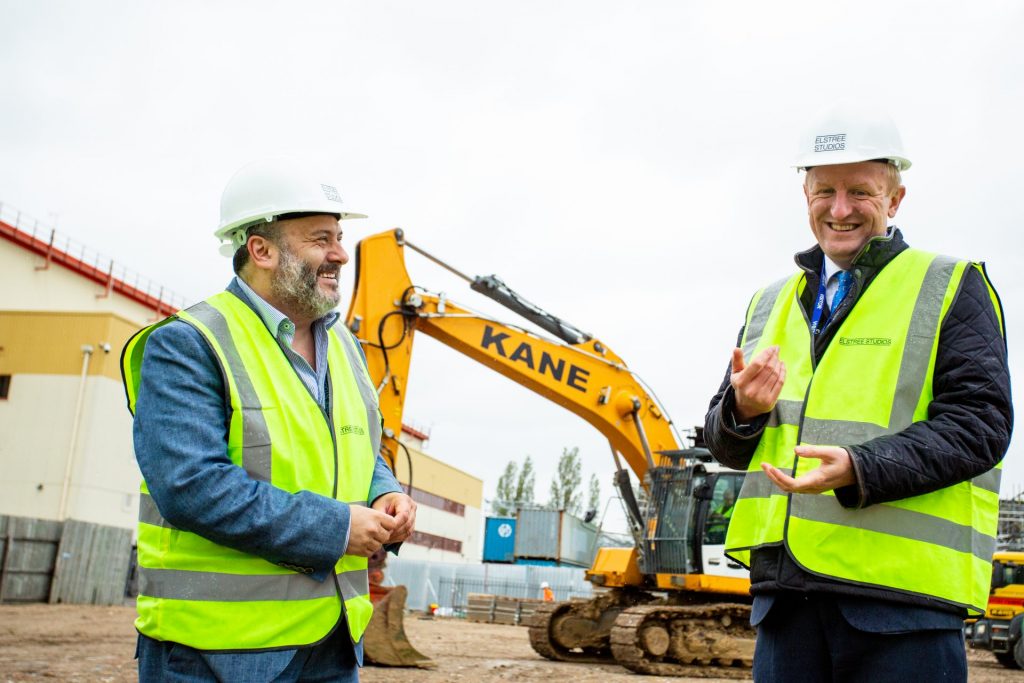 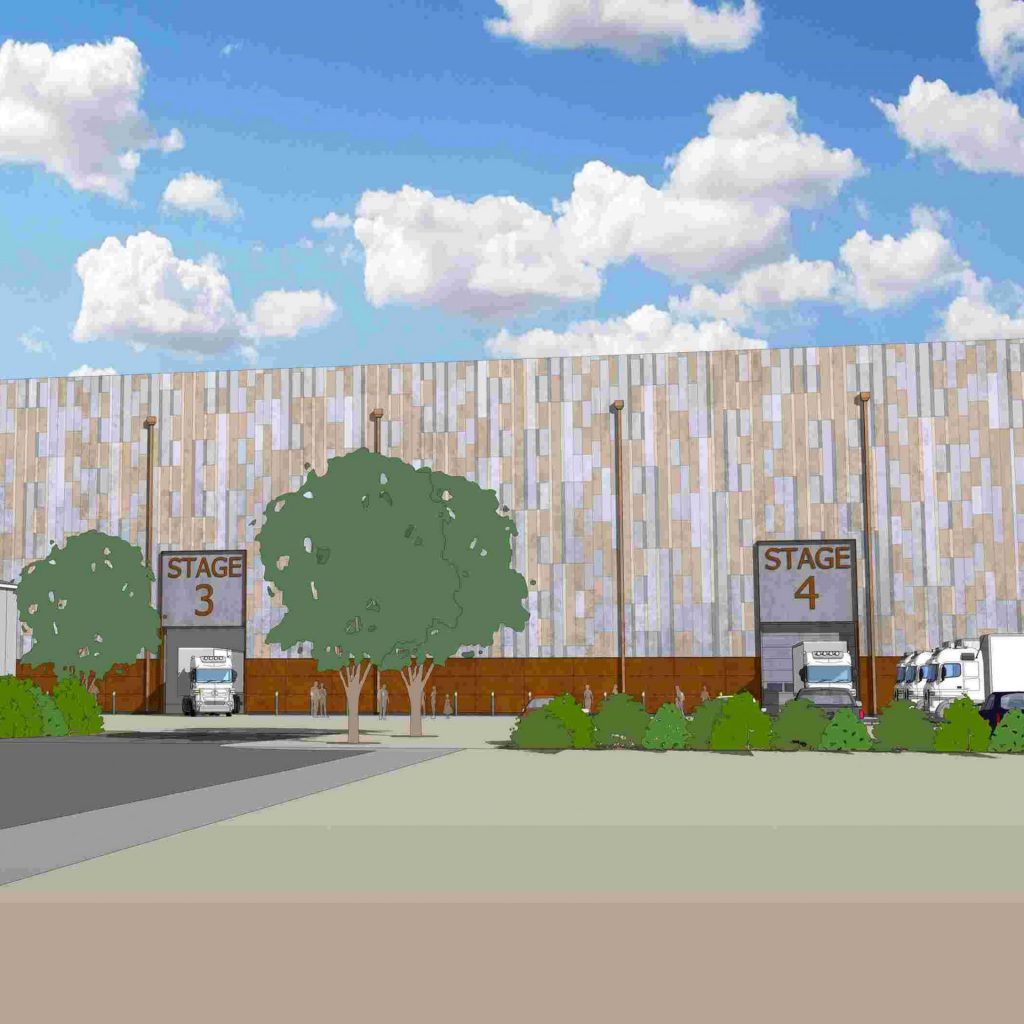 Hertsmere has taken one step closer towards cementing its reputation as the ‘British Hollywood’ as construction work on the expansion of Elstree Studios got under way this week.

Work to build two new soundstages and ancillary workshops on the site of the former Big Brother house has begun, after contractors R. G. Carter Construction were awarded the main contract for the £15.6 million project by studio owners Hertsmere Borough Council.  The two new soundstages, once operational, will create at least 800 new jobs, plus apprenticeship and other learning opportunities for local school leavers and the unemployed. As part of the deal, £100,000 per year from the rental income received by the council will be invested locally into creative industries, including local media and creative enterprise and initiatives.

Elstree Studios’ Managing Director, Roger Morris, said: “This is the first new stage build on the Elstree Studios site in over 20 years. It will be there to satisfy client demand for stage space. The new stages will be built to a very high specification, similar to our successful George Lucas stages, and will benefit from the appropriate infrastructure already in place for the Film and TV industry at Elstree Studios. Once built, there will be 9 stages available for clients on site. The new stages are next door to the Elstree Studios backlot currently used by Netflix and Sony Left Bank Pictures’ ‘The Crown’, which is just about to begin filming series 5.”

“The creation of these two new soundstages and ancillary workshops will result in at least 800 new jobs, plus 120 new learner and apprenticeship opportunities. It represents a huge boost for our local economy and ensures new and exciting opportunities ahead for our residents and businesses. Coupled with the creation of the multi-million pound Sky Studios Elstree down the road, this project reinforces Hertsmere’s status as the number-one home for film and TV production. It means that Hertsmere well and truly deserves to be known as ‘British Hollywood’, something we should all feel proud about.”

Councillors met on Wednesday (19 May) to approve the award of the contract. In addition, councillors agreed to an increase of £2.2 million for the build, mainly due to construction material price increases. Plans for a new electricity sub-station and enhanced acoustics at the site were also approved, bringing the total project cost to £15.6million.

The project has been part-funded by a £6 million Getting Building Fund investment from the government and Hertfordshire LEP.

Oliver Dowden MP said: “It is great to be here today marking the expansion of the Elstree Studios site, as work begins building two new sound stages and ancillary workshops.

“I am thrilled to support this project that will bolster Elstree’s status as the home of UK film and this country’s position as a creative industries superpower. This is a great example of our local council and this Government working together to strengthen our creative industries both here in Hertsmere and nationally. As the council has done its part to support the project, now the Government will deliver the extra £6 million in funding the project needs to get the show on the road.”

David Conway, Hertfordshire LEP Board member, said: “Our investment towards the expansion of Elstree Studios is a major vote of confidence in Hertfordshire’s thriving creative cluster and will not only boost the studio but also the vast network of businesses and multitude of jobs which supports its success.

“It is crucial that we continue to prioritise the development of Hertfordshire’s key growth sectors, particularly those that have been hardest hit by the pandemic, to strengthen the county’s economic bedrock and provide high quality employment opportunities for local residents. Through our £16.8m Getting Building Fund allocation, we are supporting five key projects to boost the county’s high value sector clusters including film and TV, life sciences and smart construction. Collectively, the projects are set to unlock 12,100 sq. m. of commercial space and bring forth up to 1,500 new jobs to accelerate local economic recovery.”

Paul Hutchinson, Director at R G Carter says: “We are delighted to have been appointed to deliver this exciting specialist facility that will not only benefit the growing creative sector, but also provide the local community with fantastic opportunities. We are looking forward to working in partnership with Hertsmere Borough Council and Elstree Studios and supporting their ambitious plans within the British film and TV industry.”

The £900m Getting Building Fund was announced in August 2020 to deliver jobs, skills and infrastructure across the country. It supports the delivery of shovel-ready infrastructure projects, selected by Local Enterprise Partnerships and Mayoral Combined Authorities and endorsed by the Housing Secretary, to fuel local recovery and kickstart economic growth amidst the pandemic.