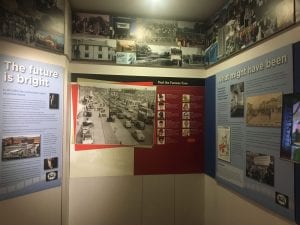 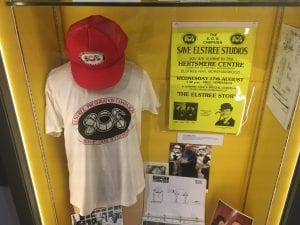 A dedicated exhibition about an important part of Elstree Studios’ history is in its last month at Elstree and Borehamwood Museum. Closing on the 20th April 2019, visitors have one last chance to learn about an important campaign that began in 1988 – ‘Save Our Studios’.

Today Elstree Studios are an essential part of the UK’s Film and Television industry, and they have established themselves as the number one studios in London. However, in the late 1980s, the studios were at risk of closure and came close to being entirely lost.

The museum exhibition tells the exciting story of the eight-year fight to preserve the site and restore it to its former glory. Led by Paul Welsh, a dedicated team of volunteers began a campaign to save Elstree Studios from complete closure. It’s an inspiring story and the studios emerged victorious when they were finally bought by Hertsmere Council in 1996, and since then the studios have gone from strength to strength.

Featured in the museum are significant archived recordings from the campaign where you can watch Paul Welsh’s strong front to protect the studios and even newsreels featuring testimony from Steven Spielberg, director of many films made at Elstree Studios at the time including Indiana Jones and the Last Crusade and Who Framed Roger Rabbit.

The exhibition is entertaining and interactive for all ages; one exhibit gives you the opportunity to become an extra in Star Wars complete with costumes and lightsabers. Film fans can also enjoy other important memorabilia including a collection of original photos from the production of Star Wars, old film cameras, original props and costumes, and designs from Oscar nominated art director, Alan Tomkins.

For anyone seeking an excellent experience, the ‘Save Our Studios’ exhibition is a worthwhile trip. Such an important part of local history deserves to be celebrated, and without the courage of Paul Welsh and all the others to fight for Elstree Studios, they wouldn’t be thriving as they are now. Visit the museum to view the exhibition before it closes on the 20th April 2019.

You can find out more information about the exhibition on their website — https://elstree-museum.org.uk